About the Orthodox - Communities in Sechelles - Seychelles 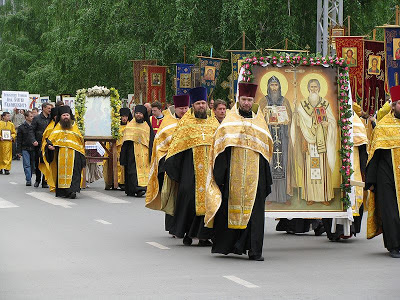 In and among every civilization since the beginning human existence, when anybody contribute to events, issues that have an important impact on the belief, faith and religious - social practice of a nation or group of nations - what has been recorded - written. We are not talking about issues beyond our boarders/frontiers - we are talking about Republic of Seychelles.

Where most if not all the exile and home politicians were concerned about political and social changes - the few of us who were concern about our ancestral faith, belief and values. Having played, being involved in the important issues which changed the COMECON, the USSR political, economic and social system - those of us who knew we were lending - playing an important part in changing the faith, belief and such values.

Out of the 21,000 exiles from Sechelles Seychelles 1977 not even 5% have returned after the historical change, involving the church, faith and belief - yet their role  -1991. More so the importance to note the degree of benefits they rip from that SIROP etc., Exile return program, their economic and social situation - position, their families and children in Seychelles and the big disparity. In polite English, French, German we have created - importantly responsible that this development and situation came about.

On the other hand we have the very large population of former USSR, the COMECON in most of these countries the first belief, practice and values is Orthodox, second Roman Catholic - short of going through statistic the sheer number. Beside our One Party State era of Friendship and diplomatic relation with these nations- under the new Seychelles multiparty and social, economic, diplomatic development the thousands of Tourist from these countries who visit and come for holiday and do business. Today there is an important Community of former USSR, COMECON citizens who have decided to make Seychelles their Home, their affluence, wealth, resources, experiences, diplomatic resources in their respective countries and the world - what this mean and represent for the Seychelles as nation. Like so many nations in the world, they have no respect for our ancestral heritage and culture - let alone the important fact that we have contributed importantly that they enjoy, embrace and share this belief and the freedom which come/came with it. This is and will be the most serious concern, challenges for our nation, children and future given the enormous disparity, inappropriate ratio of benefits from the outcome of that SIROP etc Exile return and change from One Party state to multi party. A large majority of the populace feel they have become second or third class citizens in their own land in the process and developments.

Across the ages and civilization every nation aspiration, notion and concern for a belief. In this case the Orthodox faith and its impact of their culture, society, diplomacy, business, science, education and social progress.

Contrary to what has been publish, documented and talked about - it was not the Commonwealth that made/brought the changed to Seychelles or the OAU. It was that combined SIROP etc Exile return program. A great deal mean while has began to come to light and the degree of involvements of the individuals - personalities and associated high parties, resources and networks.

In Europe and across the former COMECON, USSR when such major and important development do take place, the very important, approach, resources, debate, media involvements and citizens involvements, the respective stand and position. We in the Seychelles are not from Jupiter, Saturn or Mars, we are today - represent the 5th/6th generation of our European ancestors who laid the foundation of our nation, faith, belief, fought many important wars, gave their blood, lives that we can behold, maintain and share this belief. They brought their belief and values from Europe with them. In Seychelles for the past 15 years the vast majority have been frighten or ashamed to look at this important and highly historic development - are they scared of their shadow or what they may discover.

On our part we have been monitoring, discussing, presenting the pertinent issues of the Orthodox belief, values, many other pertinent issues as they come up for the past 25 years. In doing so we are underlining the role of our Communities in EU and the important need to relearn, search and enter into discussion with the greater Orthodox Institutions in Europe and the world so that they can contribute in a positive manner not as bigots from the position of our Community unique role in changing the One party State/system, the important contributions we have been playing to underpin, support the many important ongoing process. We are underlining that we take very seriously the responsibilities that come with that SIROP etc, Exile return Program.

In 2010 it was announced that the first Orthodox parish was being establish in Sechelles Seychelles and that work has began for the building of an Orthodox Cathedral. This journey, road, experience is very long and demanding - the attitude of the government, the NGO, the politicians and the media in the world and Seychelles. Our Communities in EU is open to dialogues, with any body - parties, wishing to engage us. There is the need to underline that in EU the many important institutions that lends to such issues and their approach. In and across France the many very important Orthodox Institutions. Given our unique history and people in the Indian Ocean the - very important Orthodox communities, their regional Institutions which exist and how they work and are working.

Once again - we want to underline should anybody, group or institutions wish to contact and take up discussions with us we are available via our forums, portal, network and individual contacts.

Orthodox church to be built on Seychelles - Topix