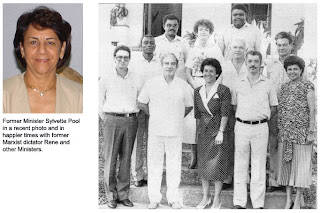 22/04/07
We had been requested by members of the Seychelles community in Exile form 1986, after the assasination of the MPR/SNM Leader Mr Gerrard Houreau wether we would take this responsibility. We gave no firm commitment, knowing what had take place in Zanzibar in 1963, East Africa, the Mau Mau Revolution, the attempt by the Seychelles French settlers to opt for Self rule, 1966/67 those who had been far more capable than our self - their aprehension if it failed.

We had also met many of the former Ministers and discussed many of the issues, problematic and possibilities. The very many Western technical advisor we had been in contact with.

Apart from former President Sir James Mancham, we were one of the few young Seychellois with resonable good connection, we had been made a Fellow of Interdisciplinary Management Institute Vienna. We had been the first young Seychellois to try and break the mould, "those sleepy Island people what do they want where are they from" look deeply into our history, national heritage and really what had gone very wrong prior to Independance, the political party of Dr Stevenson Delhomme, SPUP and DP the very terrible mess we had found ourself in and who were responsible.

When we say break the mould, Sir James Mancham in Seychelles had pictured his party and government as those being able to make Seychelles into the Hong Kong of the Indian Ocean or Switzerland.

We had been also privy to qualitative Information, knowledge about the politic of East Africa, the African Independance movement, the Mau Mau war, the Revolution in Zanzibar what led to this and the complex issues behind the colonial power conflicts, the British - USA, the Russian, Chinese Communist politic, indepth issues concerning constitutional process and concepts. The British - West Military strategy East of Suez, Zanzibar having been one of those Bastion had fallen, the aim to make it the Hongkong of East Africa.

On account of the above we had been one of the few young Seychellois who had researched by Strategic Institutions in Vienna first, the London three leading Strategic research Institutions. In the colonial days in Seychelles we had been privy to the ugly side of Colonial Services - its working. How things were done, who took what credit and given credit - recognition. This is part of the overall problem that led to the melt down of the Colonial system in East Africa and Indian Ocean.

Most importantly we had had the privilage to meet and sit down with leading UN/World Bank/ IMF/UNIDIO officials form the Region to discuss the problematic how they saw the problems of East African and Indian Ocean independance - the terrible economic, social and political, military conflicts.

With their permission, guidance and very many other - Prof Micheal Hoffman of Vienna Interdisciplinary Management, the Department for Austria Trade relation with East Africa and the Gulf Region, the involvemnet of a couple of leading business families and consultant, the very important impute of the South African Embassy in Vienna - researched some six months and finally wrote the concept for the first Indian Ocean Industrial Investment and Promotion Centre. To be based in Repoublic of Seychelles.

We have elaborated in discussion forums some of the thinking behind this process - primarily to create an economic mechanism/platfrom as had been directed by the UN/UNIDO over which small business, the Island development projects and the Indian could be discussed - the important differentiation between the Western concept for Project Promotion and the COMECON, USSR or Chines. Given the very powerful and important military position of the USSR, the Chinese in the Indian Ocean - the Seychelles. To use this platform to creat due dialague, in other words Seychelles would have to commit itself to certain norms if it wanted to get investment, project promoted and implemented, finance and other infrastructure support.

We had acquired the bitter experiences of the powers of the world institutions, the large nation power and very many other complex issues realted with such a concept. We had learnt very bitterly like we did in the colonial days the dark side of the Colonial Service and its Executive. The United Nation, the vast sums it spends in institutional systems, documentation and paper work - one thing was theory and another practice. How you can have a very good idea from the small nation how they can marr, fustrate and destroy your idea and good intentions. Implementing what they think it is best and dictated by other interests.

We had been privy to the numerous attempts to finance a military operation against Seychelles Government and the many failiurs. The powerful Western politicians involved, military, economic, strategic etc. the very many intellegence services Western, Communist, India and Arab Region.

The grave problematic of controlling a military operation, the kind of government and legitimacy - recognitions. The issues of the civilian population and the political parties some of the recommandations.

The grave issue of forming a government from the exile community and trust worthyness. The situation which had develop itself in the Commores and Zanzibar. One primary concern that those who financed the operation, the Intellegence Service and the Military - approach/practice , we get somebody to do our dirty work and we get rid of him - the vast mine field of running a country.

We had spent a good deal of time learning the rudiment of Voluntary working, benevolance action the great importance it played in European affairs. To a good extent on continent Europe and Britain.

We had come to the conclusion that those involved in a military option for Seychelles had ulterior motives and interest. Most of their interest were not in the interest of Seychelles. We had laid the foundation for long term community building infrastructure, grass root building and long term planning for our Seychelles Exile community. We are trying to add a slide interface: https://picasaweb.google.com/104198559657841209983/DropBox?authkey=Gv1sRgCPqqhKSr0M3i2AE#slideshow/5649783529295083186
Posted by http://ioiss.blogspot.com/ at 06:25