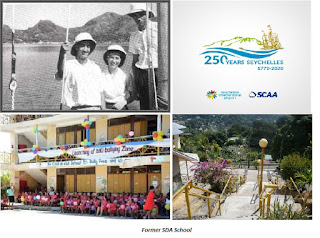 The education our teachers and parents, the old Franco Seychellois families living to the left of the Adventist school and the elite Colonial residence to the right of the school and the big white Cross in front of the Bajor/Thomas/former pastor Vervood old house. What made us and our generation  who wrote that historic SIROP program, battle, fought and waged war to return Seychelles to multiparty - as children from the Adventist play ground, Pastor House/residence  over looking State House, Gordon Square, the Capital and the Island St Anne, Cerf, Long Island, in the distance Praslin,  etc.,  and the Harbour  and today the clear vie of the 2020 Presidential election poster. In the above picture is the Head Teacher Miss Hermance Calais, her brother and Mr Esaie Stravens. Then Catholic and Church of England Mission.
We had wanted to share with you this morning in Seychelles all hell is breaking loose. From the Opposition the leader is of Mauritian decent grandparents and the vice president is of Maldive decent,  his father was a leading politician in Maldive came in exile to Seychelles. How they came into such position and wealth/money today. The fate of Seychelles the next 5 years after the election. 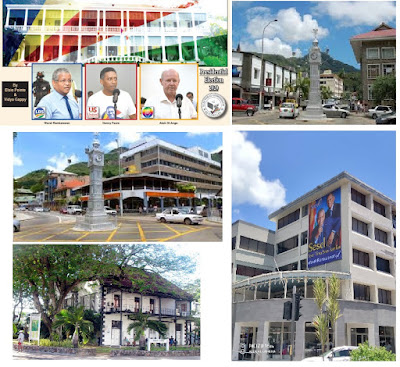 From State House ground, Sir James Mancham resting place the view of Premier Office building and this 2020 Presidential election poster. From Victoria House  the view of this 2020 Presidential poster. From the balcony of the old Supreme Court and Clock Tower the view of this 2020  Presidential election poster. From the Peace Park, the monument of Sir James Mancham Seychelles first President, the monument of President Nelson Mandela  and from the space left for former President FA Rene the view of the 2020 Presidential election poster.
President Mancham n 1992 had refused to acknowledge that SIROP program , stating at public meeting it was his fax and the Commonwealth that changed Seychelles One party system, once in the National Assembly he persude the same line of argument.  We wrote to the then Opposition including,  then Hon Wavel Wankalawan about that SIROP program never once as a Priest or activist presented our point of view and argument tell the Nation. That SIROP program dynamic, synergy and leveraged had help,  contributed that he take the role of Opposition leadership.
In the case of Mr Ahmed Afif , he had been at the Central Bank then Mr Guy Morel , then Mr Noelin Didon of Premier Services responsible for the government financial Task force. How President FA Rene and Seychelles government worked our Finance and how hey used my person and that SIROP program to leverage synergized and driven,  many of its very important finance issues including the $150 million  loan debacle and he $50 million disappearing.
The Seychellois modern generation in spite of giving them the WWW something must be very wrong with their minds. Let us go back to the Zanzibar Revolution people like Judge EJ Stiven and Pakar Family in Zanzibar,  how things were done in old East Africa. They used and applied some of those methods in Seychelles,  other leading families from East Africa. They decided to put together the Development of Premier Office Building. Its very rich history and those who occupied it. The current Lawyers for that SIROP program is office there and the lawyer who did our divorce were office there and former Minister Ogilvy Berlouis once worked there.
Give the approach, benchmark of President Mancham, example he set - our statement that we had to go to Europe to get them to apply pressure on the SPPF/PL government over their mega abuses. Leading to the infighting, which dividend, split  caused the  breakup of the old part and being led by former Minister Pat Pillay. His coming out and stating that advocating that Seychellois must never be frightened again to speak the Truth  - He refused to speak the Truth and he lost his position in  the National Assembly as Speaker and leader of the Party, events of his Presidential Candidate -a bitter lesson to all the politicians in Seychelles who  have acted and meted terrible benchmark towards that SIROP program the greater accountability.
We used to have grave difference of view with former PM Blair then Labour government in office,  their view of Seychelles politic - where we may end up and the state of things today and the current political leadership . Those who manage world politic, we had been bullied into staying away and not  getting involved.  We now have the result foreigners even if they are first generation,  coming to lead our nation dictate their politic. It is a very abnormal situation.  We had wanted to share this morning in Seychelles all hell is breaking loose. From the Opposition the leader is of Mauritian decent grandparents and the vice president is of Maldive decent his father was a leading politician in Maldive came in exile to Seychelles. How they came into such position and wealth/money today. The fate of Seychelles the next 5 years after the election. At the end of the Day Britain has lost BIOT,   the proposition and ideas we promote to his government for the Chagos Islands and their positions. We have battle and every battle have consequences among them,  one close family and children - they will ask their mothers what for and why have our father hurt and destroy,  caused so so much pain so that foreigners can become Presidents and vice President and lead his country. dominate the older relatives. It would have been better to leave the Communist in Place.
We also have a Commission investigating the Hotel Privatization process and Mr Noelin Didon was the Secretary of that Body and how they use that SIROP program to leverage many of the Hotel privatization,  the outcome and the situation with the Commission,  I must not speak I must not present my knowledge and view of what took place.
Events of the past  five years in the National Assembly how they got to where they did, the lies and the corrupted spins, the European Union involvement - Impute, the politicians have feathered their person and those from that Truth Commission uncertain fate  to get compensation, they have to start a National Lottery. This is utter madness and they have audacity to put the Presidential poster of Mr Ahmed Afif on Premier Building  - the long saga of the Central bank and that SIROP program cover up and the $ billions involving associated syndication working and that program,  those who have amassed vast wealth and fortune -  on the other side of the road the Church of England. Foremost that SIROP program is incomplete and we have gone on to initiate the NEOM thematic. Part of it leading to the Israel  - UAE Accord. The/an LDS government have not come into Power the very negative experience our person is going through this morning even to write this Blog. 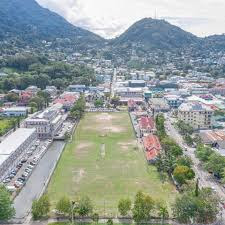 Given the gravity importance of that 2020 Presidential election, the issue and thematic had weighed if we ought do a video or write a blog, we will start with a Blog. Come the next five years  all of our old parents not there anymore and older members of the Royal Family no more the next generation. Prince Harry reminder this morning 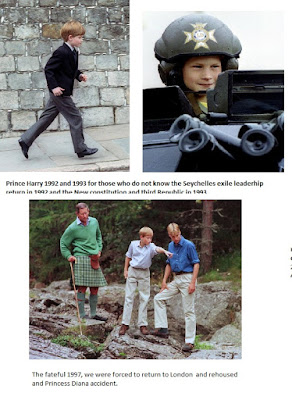 21/9/20
We posted a link of SBC News at our Forum Truth Commission, this morning tried twice to post a very burning comment at Facebook two third way both got deleted accidentally and our Facebook about pain in the backside . The world have gone completely loco, the experts around today. 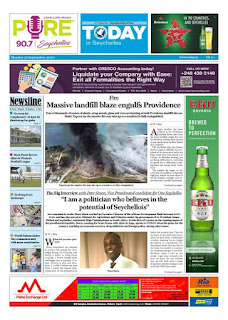 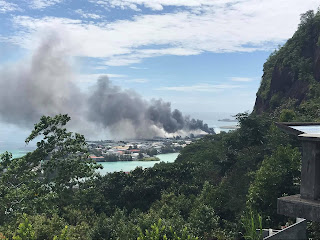 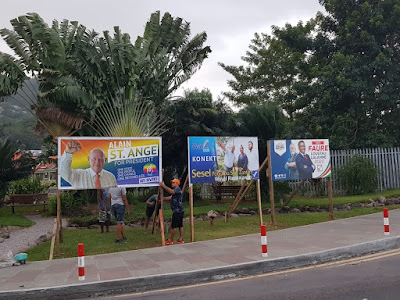 ...... nobody like time wasters- If your Mum was with use would have told her "zafer in Bon in Seychelles" - meaning. All Herve think is selling his phones. Hence I turn to you. For the 2020 Presidential and Assembly election in Seychelles a political party I had lost hope is emerging. Mr Ralph Volcer who had originally taken the idea from us the Orange Party ( ex NDP President)-I cannot trust him, that SIROP program is not a political party and ex leading Army and Minister it fell apart and he went his way and the army person his way. Two years ago another political person from a breakaway took it up with another former minister . Until the nomination held the view they were messing about as they say in English. Two leading Seychellois who lived in exile UK had joined, then Mr Ralph Volcer the original person and Mr Chadstone. Mr Volcer is fighting to get Cannabis legalized in Seychelles. The good things is that you may not remember that SIROP program and the Orange party in Kenya, Tanganyika, Uganda,  Central Africa, Zimbabwe, Ethiopia and Somalia and very important Madagascar the current ruling party and Mauritius the Orange party. In India and Philippine. Please read and react. http://www.rijasolo.com/-/works/afp-reportages/page/2...

Leader of one of Seychelles’ opposition parties resigns

Paint It Saffron: The Colors of Indian Political Parties

https://thediplomat.com/2018/09/paint-it-saffron-the-colors-of-indian-political-parties/
Justice and Development Party (Morocco)
https://en.wikipedia.org/wiki/Justice_and_Development_Party_(Morocco)
We would like to address the Leadership of One Seychelles and its supporters - please take the time to read this Wikipedia. Having written to the leading world Institutions those who had question how we would managed, develop an adequate system of memory for that SIROP program and the impacting and developing issues  - the Wikipedia project  is far from perfect. Even the current King of Morocco his Majesty and family forgets sometime . The issues of Orange/Blue Party of Morocco and that SIROP program.  President FA Rene and Sir James Mancham knowledge,  They why. 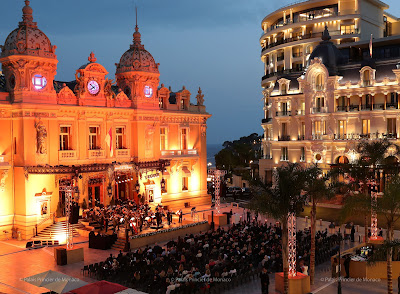 Prince Albert of Monaco official published this topic this morning those who would like us to be and comport like imbeciles from the Indian Ocean. Last night Mr Christopher Gill TV discussion on the devastating Economic situation on Praslin Island . He of  all person shared a unique photo of a cocodemer in  a nicker, we had wanted to publish a very special thematic,  how the Greeks their Female as Gods supported their civilization and we have removed and implant 6 or 8 cocodemer and hope one day to make a proper graphic of it. In Monaco the Royal families and their daughters who have been with us ever since they were children and today. The dynamic and  leverage system we build together and put in place which have driven many of Seychelles issues. This said that Truth Commission that Pandemic should not have happen in Seychelles those who  pray that God will send the rain. Your minds and eyes must be more open. Those in Seychelles who will say this is snobbery. Mr Christopher Gill statement to the media,  the Seychellois will need to move their butts if they want to get out of that Pandemic situation and rebuild their economy. The many old Italian families with important connection in Monaco who were involved contributed and help with that SIROP program, specially the Reclamation project financing given  that Vijay Construction major contribution to help put  that fire under control  and for many years.  They started the Tourist Industry and finance Industry in Seychelles.
Posted by http://ioiss.blogspot.com/ at 04:16 No comments: