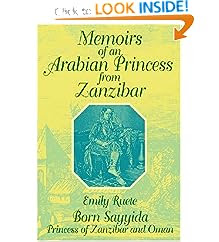 On the 28/09/08 St Micheal Feast Day our 60th Birthday, we watched via
ARTE TV the documentary on the life of Princess Salma of Zanzibar. We
will add some link at the bottom of this article.

In the
documentary and a great deal of very serious research and work done - a
Zanzibari lady professor at a leading German University moderate and a
leading professor in Dar es Salam University also moderate.

Beside
the German like the French, Portuguese or British and Italian need to
emphasise their Colonial power, sphere of infuence and power over the
land - territory they once held for current generation and other
propagandist reasons. It was well documented.

Beside our
history, political interest as a young man teen in early 1960's when
our relatives and later parents when to work and so to say settle in
East Africa. The impact in colonial Seychelles, Mauritius, Reunion and
the region. The Economic motor, communication system and shipping links
between the region. Also the important education, medical and religious
advance difference between those Island countries.

Not only
educated in East Africa, some of our siblings were born there, the
quality of life, culture and social progress then which existed.

With
the call for independance, the discussions we had at school after
independance and those who had lived there befor independance -
development of things, the region, African and the world later - the
future. We discudded in raw details what independance would entail -
"so to say" the Pied Noirs of East Africa. Independance process in
other African countries. The aspiration and ambition of our black class
mates, the black people and individuals we knew and black friends.

Upon
our return to Seychelles and not able to return to East Africa - Uganda
to finish our education confronted with coping and making do with what
we had acquired in East Africa adn those who had lived, work and
journeyed to East Africa. Most important the development of Seychelles
Politic.

In Seychelles before 1976 from 1961 those who were
able to see clearer than those Seychellois and expatriate who had live
in Seychelles inspite of their riches and education, position in the
Island politic and regional affairs and colonial administration. Most
were aginst Mancham idea of Sechelles - Seychelles joining with
Britain. However we also knew that FA Rene, SPUP call for Independance
and Republic international status where and what this would lead. The
camp and position many took. Those also who supported and favoured a
kind of Rhodesia unilateral break away situation to avoide the Mancham
or FA Rene future development. We maintained this until we had to
depart, go into exile from Seychelles in 1976 after independance.

In
vienna we maintained contact with individuals who had live in East
Africa and those who had worked in East African. Like in persuing our
business, intellectual development and supporting the political
development of Seychelles, the Indian ocean Region. Not to exclude the
very important role and position UNIDO, World Bank UN Office in Vienna
played. The very large army of officials who work there from Africa.
The intellectual exchanges and very important the privilage to
undertake the Research and promote the concept for an Indian ocean
Industrial Investment and Promotion Centre. Edited by African Officials
of UNIDO - world bank support. The Cold War, the Camps of West and East
their political line, views and interest.

It must not be
forgotten and underlined that the bold challenge to undertake this
research after discussion with UNIDO officials for East Africa,
Seychelles, Mauritus was prompted and stongly motivated by our
education in East Africa, life there, social situation. We had
witnessed the collasp of economic, social and political progress in
East Africa and other parts of Africa - then OAU> Very important
given our French and European ancestral roots was fully aware that was
not the economic direction and road for our nation, brothers and
sisters.Underlined by the fact we had had very direct and influential
discussions, grooming, challenges set to us by those who had worked in
Colonial administration in East Africa. Most important the argument,
debatelogic . We did not attend Universities to get lecture on East
Africa History, people, economy, colonial administration, Justice and
Judicial administration. We wereprivilege to have been taken for unofficial adoption by somebody who had been influential, leading in many important aspect of Zanzibar, Penba, Tanganyika
, Kenya colonial administration and such issues. This was or were not
hear say stories - this was the vast experience and wealth of knowledge
who had been in theOfficial of the Attorney General, Administrator General, close advisor to the sultanate
very many years and after the Revolution. This is somebody who had
close and strong links and contacts with the people, the Asian, theGoans/Portuguese, the Ismael's and the Arab communities, including the Seychelles community - who had served the Island some 27/8 years.

We have underline our French ancestral links to the Arabs nations and in turn we the sechelles - Seychellois how we relate to them. We are also talking in term of religious, cultural and economic, ( The very terrible phobic
which the USA and so called allies unleashed on the Arabs and anybody
who try to understand their plight, politic, religious thinking and
development)

Beside our own ex Seychelles community in Britain
form East Africa, their important view on the politic of Seychelles
then, the role of former president JRMancham - the mess we had landed and FA Rene SPUP government, individual like Mr Robert Frichot, Dr D'offay, Mr Gerrard Houreau their views and those in France, Germany and Italy who had live in East Africa.

We
have underlined the important efforts we made to address, research,
build contact and understand for our self by some of the visit,
research and discussion in Germany in preparation for not just theSIROP exile return program of 1987 but the many attempts for an eventual military change in Seychelles and where this would lead.

We cannot underline importantly enough some of the approach, issues, economic thinking, lobbying with OAU political parties, Officials about that SIROP ETC exile return program the position of Zanzibar.

It must also be noted the size of Zanzibar, its history, the strong political relation between Seychelles and Tanganyika - Tanzania and the resource FA Rene and the SPPF government used , relied upon to develop their politic, regional influence, politic, economy and international relation.

Those in German who were very curious what relation Seychelles had with Zanzibar when we were doing all that. Their lack of information and misguided inceptions.

What is abundantly clear and history repeat itself, the approach of the German before the collapse of the COMECON, the changed in USSR, the Fall of the Berlin Wall, changes in Africa, Asia, the Indian ocean and latin America. The mass of political, economic, diplomatic betrayal, suppression and very nasty outcome across history - our French European history. Our Sechelles - Seychelles EU community
unique role and involvements in these historical development and
process. How then and there they are manipulated for a given reason,
advantage or disadvantage and these are never written or noted for
history.

How shortly after the political change of 1991 in Seychelles, people and individuals like former President JR Mancham
who promoted/propagated that Seychelles had change upon their unique
deeds, the confusion, betrayals, back stabbing in the camps of the
Exile factions and the Oppositions in Seychelles.

{In this documentary on Sunday the 28/09/08 at least they had the courage to say and state bluntly the very sad and terrible Saga of Princess Salma of Zanzibar, how the German used and abused her and later the British Government and Officials.}

We
have done some brief research on Zanzibar history which include the
time of her Saga and history, the tendency for those who write history
to write from their prospective and political inclination. A very great
deal of German History in Zanzibar is not available in English or
French. The apply to ourSechelles -Seychelles History those who wrote
the History of Seychelles, from Britain who have left out masses of
very important information which make a people, nation and who we are
in those parts of the world, our origin and the very nasty, ugly and
destructive process ofsuppressing those information, manipulating their for their very self fish interests.

When
we look at the state of Seychelles today and Zanzibar, East Africa and
the African Union, the important role we have played to promote
political changes in Zanzibar actively and those - no where is there
any record of these involvements. Those who have and are taking the
credits - the mountain of corruption or ice berg of corruption - the
practice or past practices. The same our Seychelles EU Community role
in bringing about changes inOAU - to African Union, the vast mechanism
and institutions, financial and human resources of African Union and
the region , the terrible corrupted practice like the Germans, the
British, the French, the Italians , the USA, the Russians, the Dutch,
the Austrians, and other Colonial powers.

Sadder still, the millions of US dollar or rupees that the nation are investing to educate the many academicians, promote centers of learning and create such national institutions. They take on board the same very evil corrupted
practice as mentioned above. The results we may display a great army of
academicians for a small nation but pour grasp of real knowledge and
education per say is very corrupted. This is the trouble to building
the future of the nation and its development. Those who believe in
building their little position andtaking credits for work others have done or discrediting them. This is the state of Sechelles - Seychelles.