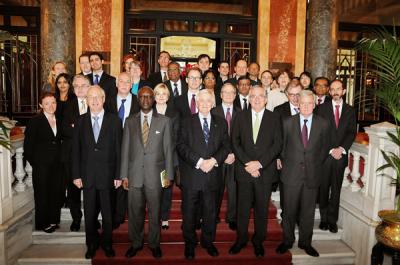 22/3/2015
Comment - There is a very strange, abnormal,  eerie feeling this Monday morning since the announcement of the UN Arbitral Tribunal in London. Reminding one of the time of Independence and self government era/feelings - saying goodbye to the colony.

We have been trying to discover/find out what next - those Chagossain have been granted British Citizenship after a very long and bitter battle - they will not be able to retain their citizenship. The British government will not let them keep it indefinitely. This include all the financial, social, education and medical benefits.

They will have to acquire Mauritius Citizenship as per the Ruling - if one is to go by the ruling.

What about the planned feasible study for their resettlement this also will have to be shelved -it is the sole responsibility of Mauritius -, beside UN, EU, African Financial help  - the British government largess.

Dr Ramgolam stated the USA must retain their Military base/Facilities.

What about the many Trust and Bodies set up to work the issue under British government and political./economic prospective - it is going to be messy a bit like miniature Scotland getting its independence - nobody had waited for this to happen suddenly.

The Legal rights of the Illois and Chagossain will have to revert to that of Rhodrigue Island. They will have to undertake the process.

We want to address the two instance where those Military strategist created a War situation, the first and second Gulf War, Afghanistan and current Gulf/North Africa highly volatile situation - beside the situation between the USA and Russia and China in the Indian Ocean.  Those who suggest  they/somebody may start a major conflict to override the UN Arbitration Tribunal ruling.

It is all very well for the people and sovereignty of Mauritius to be reinstate - the much bigger picture, the military situation in the region, Britain engagement, many political and Security issues because of their position and Rights over the BIOT.  Those nations and entities with important military resource who will scene this situation to exert their power and interests - India for one, the situation in Iraq and Iran the current Nuclear negotiation and Pakistan own very situation. The coming election and the British defense budget, PM Blair and Brown military concepts for those Island and region - the issues of Pirates and Maritime Security. The current Coalition government. {this topic had been linked to Ukraine those who know/aware}

Most important we can expect a very different media,  human and institutional relation between the British people and the Chagossians community, the Seychelles community and the Mauritius community in Britain and Europe.

# We have read the issue of environmental impact of that resettlement program, in 1980, those who would have refused to acknowledge this, the El Nenhio phenomena which followed - the manner KPMG have presented it. How they judge it can be managed. When we worked the subject of the Channel Tunnel we addressed the debacle and complexities of continental environmental, synergistic, archaic displacement and its global impact on Madagascar those who refuse to listen and what ensued.The world and small like Seychelles today have acquire a great deal of knowledge in the science of managing such topic and issues - for instance the very many projects in Seychelles on Risk management and they will have o send a great deal of resource to revamp and update their current aspect if and when the Resettlement program get the green light - particular its close proximity and many Arcadian links to BIOT and those Islands. Until 2000 nations like Sechelles Seychelles were not meant to understand and know such highly complex discipline and since. Or for that matter that Pan African/Europe Transport project and the Spain Morocco link - Exile/refugee politic of Europe and Africa. There are very many project out there, to collect data and experience. In Europe/East Europe the many environmental impacts of expansion and enlargement - which were never addressed but just implemented an later the impacts debated, analysed and studied. This is a special science  hence then science of High Management and we have had some 30 years workings this discipline in the Indian Ocean.

Given that KPMG have undertaken that study and he report, they knew and have know a very great deal about that SIROP program and the many impacts we have address in the region on the COI countries, on India, Pakistan and gulf Nations. Yet their respective position.

On the other hand - at the high of 2007/8 on the back of the global impact of that SIROP program, Europe, Asia, USA, Latin america, Russia, china, Australia positive synergy from that SIROP program, because they KPMG, E&Y, all the big four they started developing management discipline and badly thought out  and integrated this in to their accounting discipline and this was/became a major aspect and reason for the global meltdown of 2008. The many court cases, documentary. The big banks role - their will be fiscal environmental and synergistic impacts when they introduce the Banking institutions in BIOT to work that resettlement program. The very British approach to banking unless Mauritius is allowed to introduce degree and percentage of its Banking and financial Institutions. The archaic relation, Illuminati mechanism.  The government of J A Michel and the SPUP/SPPF/PL refuse to listen  and when the Project begins its implementation process - then they will run all over the pace seeking for resource to counter managed the impact.

Correspondence between Foreign Office Ministers and ...

It is great news that the Permanent Court of Arbitration has ruled that the UK breached its international obligations in creating a Marine Protected Area around the Chagos Islands in 2010. Two judges issued a dissenting comment, saying that the UK showed complete disregard for the territorial integrity of Mauritius and had used the 'language of intimidation'
We must give credit to the previous government who took the UK government to the Permanent Court of Arbitration. Mauritius had a strong legal team made of mauritian, american and british lawyers and advisers.
An independent study commissioned by the UK government has already found that a managed resettlement programme could be completed to create an environmentally, economically and socially viable and vibrant society.
It will be long fight. The Brits are good at delaying tactics. It took many years before we got to Istanbul. SAJ will need to look carefully how the government proceeds especially the lease to the americans is due to expire.
WE TRUST SAJ AND WE HOPE HE WILL GIVE THEM HELL !!!