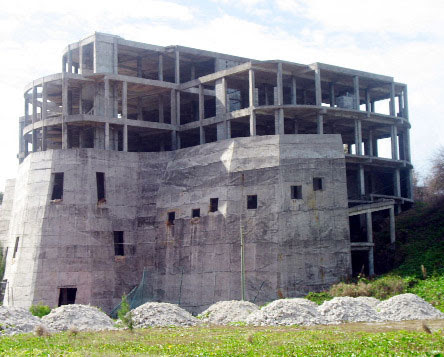 What to do about an eyesore?

The abandoned shell of a huge concrete building at Soleil D’Or, North-East Point, has been an eyesore for years. According to reports, the owners met with financial difficulties after the start of the construction and have not been able to resume the project.
While authorities cannot just step in and do away with an abandoned building project, there has to be a way of dealing with cases that become an eyesore. This one has been there for around 15 years now.
Source: Regar 8-21-09


There are one or two articles of noteworthy this week at Seychelles e-news one of them being the above article – indeed answers need to be provided.

After the Second world War – the Land which belonged to Mrs Steven had been used as a military dump – part of that stretch of land. For all its beauty.

During the Second world war – the strategic look out position to ships and such movement intending to come to Seychelles for water etc and rest for their sailors.

We have not come across older written issues and certainly – we have every rights to join those youth who have questioned why were they not taught certain important historic and national issues. During the bitter rivalry between the French and the British. The strategicness of the place – its commanding view of the Harbour.

About the time of Sir James Mancham premiership several investors were interested in that stretch of land along the cost. The debate then about the acquisition of the property by a German/Swiss business Mr Bantely – his daughter married Mr George Lefevre. The plans and proposition for a major tourist development.

Equally important the debacle of Hotel des Seychelles, owner Mr Jerry Legrand – upon selling the Hotel des Seychelles, He purchased from Mrs Steven that very beautiful part of North East Point property. Where as children, the families, the merchants communities and the SDA Church held their picnic form time to time.

There were and have been other national, historic debacles involving the Bonntard Family – Chief Justice Retardation how the lands were acquired in those days.

For history – the most important debate about that stretch of land from the Tip to where the Bonnetard lived. The debate and decision to introduce and develop Tourism in Seychelles as an economic viable step. The Colonial British government, the SDP, the Party of Mrs Delhomme, the Party of FA Rene – SPUP and other political factions.

The debate whether to build the Seychelles International airport on that stretch of Land. Or at Point Larue, the land of the Nageon des L'etempt, the D'offay, the Sovage, the Roullion, the Jubb family, the Cundell, Benson, the Lafrotune and others, Judge Stiven, further towards Victoris, the Stravens, the Ernestine, Lafrotune, the Golden Eggs family - Esparon, the Mondon, the English family next to the Church of England – great stamps collector, the Albert and other small property owners.

The argument against Northeast Point as the plan was called.
During the Monsoon the very strong cross wind – the very grave danger this would pose, landing and takeoff.
The noise level as the plan landed and took off for the in habitants of Victoria.
The issues of dredging – damage, this would cause to the reef system.

Point Larue in spite of heavy protest and compensation if any to be paid was chosen. Those from the Town Planning Department role including Mr Gerrard Houreau, Mr Harold Rene and others. The SDP and then First Minister James Mancham.

Beginning 1979 after the Attempted coup by the South African Mercenary, the methods they used to get to Seychelles. The stationing of Tanzania military, Cuban, Soviet in Seychelles. The military organs of the Island Republic, intelligence, special unit etc. the debate which had began to arise about the safety and danger of Tourist using Seychelles International airport. With all the military activities – the negative impact on the Tourist. The then debate by the Ministers, political and military elite of the SPPF government of building an alternative military Air port and the most obvious available place would be North East Point. It would be much smaller than the International Air Port.

This plan kept coming on and off the Table – be it by FA Rene, government, the foreign parties involved, the Soviet, the Chinese, those form OAU, the Arab nations, the Cubans.

The Seychelles Exile communities have put /planned at least five major attempts to change the government and Island by Force. Those involved equal debate about the wisdom of having military activities at the Seychelles International Airport, the public and the Tourist and the International communities. Hence had the funds become available those in favor for this project. It would also have provided the new government an alternative – securer place to land military equipments, troops, joint exercise in the eventuality that the Seychelles International Air port became under other control – counter coup and the such. The funds and cost involved were grossly calculated. With all the necessary infrastructures.

We have provided a list of the Projects and program which were to be implemented under the SIROP etc other political faction joined. Again one of the project would have been a separate military airport at North East Point.

We have had a very efficient Soviet/Russian Embassy in Seychelles, French presence, British, South African, USA and Chinese. Even if they were not there Officially. Those who know that when you put together an International Exile/refugee or repatriation program – even if they are not put on paper, the ideas, get discussed around by those with vested interest.

The Interest of the Russian after the fall of the COMECON, China, the USA. Come the announcement that Seychelles would become a multi- party nation. Suddenly – those parties close, friends and associate of the former SPPF regime who began to acquire strategic properties, location in Seychelles.

For what the international media, the USA, EU, African media and the national media have been informing the public. The very many important issues the public not aware off. The German Reunification had taken place and changes had taken place- Perestroika in Soviet Union. Those from Russia who decided to acquire that strategic part- point of Seychelles. The politicians and government active participation.

When we visited Seychelles in 2000 first time from exile construction had began. Some of the debate of those who have wealth to build and design their place of residence to include a Military Bunker in the eventuality of a Nuclear war or such.

Further up the road the former Property of W&C French which was acquired by Mr Jamshed Oliaghi member of the Temooljhi family merchant.

Meanwhile there have been a number of large development and construction taking place. Most important the Reclamation – Phase lll development of Seychelles by FA Rene, the debate and question at the time of the project to leave a channel for the fisherman to still being able to use their boat, the properties affected, including that of Mr Ben Choppy. The Island reclaimed by the South African, Pinnacle Holding for the mega Seychelles development. Not to overlook and forget the project, planning details for a High Way/Motor way along that stretch of land linking to the Reclaimed Island – the Pinnacle Holding development and the proposed light Transport System from South to North of the Island.

This project and future reclamation to increase Land capacity have brought to an end any idea or debate of an eventual Military Air port or second Air port – for whatever use/function.

We trust readers will point our brief thread to the Russian developers and the many in Seychelles concern what will happen to the place in the future.

By now very many in Seychelles, internationally – that include Russia and former COMECON nation that in Seychelles we have the abilities and capacity to influence a given issues or their related problematic in a positive or given direction of our nation choosing and decision.
Posted by http://ioiss.blogspot.com/ at 02:48