We ask readers to refer to the link we will be adding with this thread from Nation, the reason the Opposition gave for boycotting the 2011 national Assembly election. 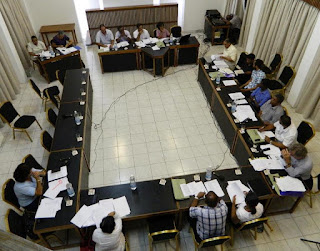 In spite of having address the issues of the Presidential election 2011 and the registration of that SIROP etc exile/refugee program by LUNGOS in Seychelles, events during the Presidential election and to date - noting that the EU have voice their concern to Seychelles Government regarding this very strange and bizarre situation and position of Seychelles government and SPPF/PL about the 10,000 - 15,000 Seychellois living in exile and government refusal for the past 30 refusal to acknowledge they even exist. It is unparallel in modern government and democracy - for this, such situation to have gone on for 35 years and nobody form the West and EU call them or anybody to account.

Again - all the Opposition in Seychelles who have failed, refused to address or demand any form of national or international accountability about the fate of the 10, 000 - 15, 000 Seychelles exile/refugee.

Their Human Rights violation under the Constitution

The violation of their rights to vote, take part in our National affairs because of their exile/refugee situation

Violation of their Rights for proper Compensation.

The massive abuse and Corruption by the Seychelles government to collect and receive Funds, Grants targeted for supporting those living exile/refugee, democratic aspiration - these money, Funds, grants being improperly used. This for the past 20 years.

At the Blog for Seychelles Freedom Party, we read today that they have replied to the President of the Electoral Commission explaining the requested meaning of "bona fide" in their constitution. Again we will be adding their link to this thread.

In Seychelles - we have some 150 - 300 individuals who have returned from exile since 1991. In which case given the development of LUNGOS, civic society the requirement and need to have had some kind of Body, structure to represent the many highly important national interests of the exile/refugee who have returned and the 10,000 - 15,000 in exile.

There are former President, several ex Ministers, Leaders Members of the exile opposition and factions, Lawyers, business man and priest - yet none have found it necessary to support or put in place such national Body.

Seychelles prides itself for environment and ecology issues and policy - yet for the International communities where one of the most important agenda regarding human being is the topic of exile/refugee - nobody has sounded the alarm loud enough, lobby loud enough and express their concern loud enough. The utter hypocrisy and highly abnormal Benchmark and utterly corrupted practice in place. It would have been interesting to sum up how much money the Seychelles government have been given, fisted and granted over the past 20 for ecology and environment. In relation to the National exile/refuge issues.

These exile/refugees from our Nations have found refuge in the world leading civilization - how they deal with other International refugee issues and of people and nation, situation less deserving.

The objective of this thread is to focus on the National political situation - We have brought significant economic boost and vital economic support to the 2 and 3rd Republic. We have made highly important contributions and impacts at all level of our 3rd Republic working, Constitution, Judiciary, Police, Army, education, medical, public Service, private sector service, Tourist industry, the Small business, the Offshore industry, service industry, the Oil and energy industry, Fishing Industry - it is only natural and proper that we had due and adequate political representation at Local, Council, and National including international level to that we best represent our cause. As well as global and international issues - Indian Ocean, Gulf region and African Union.
http://www.guardian.co.uk/business/2011/aug/14/larry-elliott-global-financial-system
In Seychelles - all the political parties talk and write about scandal and corruption - this is the biggest national scandal and corruption and going on for 20 years.

We had acquired some momentum in the progress, work to register SIROP etc exile/refugee program in Bruxelles and Seychelles. The massive personal, dreadful, traumatic time we went through the past two weeks - those who do not want us to become engage and get that SIROP etc exile/refugee program registered in Bruxelles or Seychelles. { Yet the length and extent they are supporting the destruction and destabilization of all North Africa and Gulf Region and the important extremist elements involved - their media involvement, this has been their position and attitude for the past 20 years.}

To make matter more complex given the very many possibilities using the Social Network - none or very few fro our Exile/refugee be they in Canada, USA, Quebec, EU, South Africa, Australia, Asia, New Zealand and other parts of the world join the existing network available to support, and let the world know their views - they prefer to suffer in Silence. They prefer to be and live as unknown and none existence entity, which do not do justice to our Greater Cause.

Everybody forgets is was not NDP, SNP or SFP that brought about the important political changes in Seychelles after 15 years of one party State - the changes were brought about by the Exile/refugee. Seychelles National politic has reached dead end/stalemate. In exile there are very many highly calibrated, experience Seychellois citizens and national who can bring the due revival to Seychelles in term of politic, social, democratic and the many institutional fibre that is essential, necessary to build a nation. There is the need and call to remind those political parties and their Leadership and Executives as well as their Supporters. We also know that from those 10,000 - 15, 000 the percentage that represent the Conservative, the SPPF/PL, the SNP and other Nationalist or Liberal and Socialist political views.

Note: We have read the artile and seen the picture of those who protested in London about Sechelles Seychelles government vilation of constitutinal rights regarding exile/refugee allowed to vote.