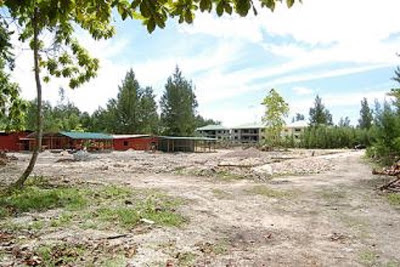 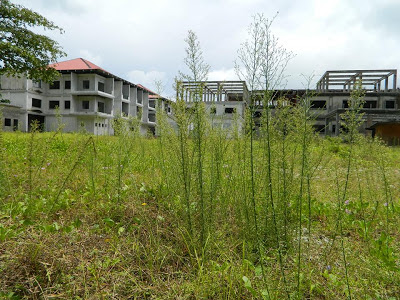 "The Supreme Court has ordered that fresh summons be served on the office of the Seychelles Specialist Medical Centre to appear before it in two weeks time to contest a seizure claim.The Seychelles International Mercantile Banking Corporation known as Nouvobanq is asking the Court to seize the company’s property which is based on the sea-front at Providence for failure to repay a loan which is believed to be around €15 million.

The Court recently heard that the respondent had not been served since the company’s representative, Dr. V. Ramadoss is currently out of the country after falling out of favour politically with the ruling Parti Lepep in April last year.

Chief Justice Frederick Egonda-Ntende therefore, ordered that a new summons be served on the company’s headquarters, which is listed at the Pirates Arms building on Independence Avenue in Victoria. This will allow the medical company at least 14 days to prepare their answer to the bank’s claim."

Having written the thread about our Exile/refugee link to Sri Lanka and its exiles, the need to react to the above issues.  Every country - nation have their manner and way of working, in a much that the UN, EU Commonwealth and African Union judge they can or may at some time be able to calibrate this that everybody work along a given benchmark - we have 36 years of monitoring and working the world most complex issues - this will never happen. In Seychelles we need to face stark reality.

Over the past 30 years our highly complex and complicated workings, ways, manner of doing things in Sechelles Seychelles - there after all those who choose to given their spin, reason, explanation, expert opinion - the reality.

Those surrounding former President FA Rene, then SPPF/PL, including then Minister James Michel the very many issues regarding Seychelles Development and International business we have contributed in one form or another. Particularly the person of Dr Ramadoss.

We  need to stick to specific - each time we have gone about undertaking  any major development, associated working of be it our greater EU Seychelles workings or the SIROP program how it has influenced and impacted the Politicians and business entity, Developers in Seychelles to react and  become involved in a given project.

This manner and approach of workings is not just Seychelles, it apply to the COI nation., Africa, Gulf Region, Asia and India, beside Europe, China, Russia, USA, Latin America, and North America.

over the past 36 years when ever  such issues have arisen and impacted a major development we took and have taken to making notes and saving them so that it can be referred to if any body wish /requested and developed discipline and other complex management mechanism to monitor and work this issues including a t high global corporate, university/education, Banking and Institutions workings.

If anybody requires - the details of events that caused Dr Ramadoss, then President FA Rene and Associate to formulate this prestigious Hospital project.  We also have the capacity to drive such engagements and development once formulated.  What took place and why this did not go forward.

We also have important experience in the Health, Hospital, Medical  - National Health, Politic and Management - formulating policies at EU Government, the USA, Africa and other Nation government level.

Among one of the reason we had attempted 13 rimes to meet with President FA Rene was to discuss exactly some of those complex issues - nobody nor him requested that we make a list of the topic for discussion. It was clear there were/would be a number of highly pertinent issues to discuss.  Hence during the 13 attempts as we stayed in Seychelles 2009 those who followed and monitored the debacles in Seychelles.

We had wished to raised some of the very major corporate workings with President FA Rene government and associates over the past 30 years - those that had come to fruition and those that had failed including that SIROP program/ - in private we did discuss this Development - how we had been involved and contributed.   President FA Rene total refusal to meet our person.  Hence upon our return  to Britain, the many we addressed and explained the situation - most important that SIROP blog we put into place - some of the pertinent issues which came out not meant for the public and the political reaction and corporate reaction.

This said we -  are reasonably aware of the reason Dr Ramados had to leave Sechelles Seychelles.  Given that the court stated its wish to work more independently of politic - those and the Bank need to note, study what we have addressed. Issues which will impact public opinion, the Judges deliberating the case, the police and other future investors.

The question anybody ought to ask including the Bench and Judiciary in Seychelles - how long can such abuse go on before any major retaliation, back lash or collateral development occurs. We have explained the 2004/5 Earth quake and Tsunami, the global meltdown of 2008 and they were importantly linked and related - yet the SBC, the current government and President Office and so call other experts.  Every body choose to ignore, study the gross injustice and abuse that have been going on for so long.

This is supposed to be a medical,  health and hospital project about saving lives and keeping people alive.  The science  of keeping people alive is very complex and complicated  and the many discipline . One of the discipline involve and very important is what we have addressed here.  Seychelles boast on paper and media wise great achievements as stated during all of the month  of June celebration.  This Hospital project is a very blunt and stark reminder - the lies and distortion being told in Seychelles and those involved.

Harley Street in London is very Famous and across the world - how those business we had registered impacted and influenced some of the decision   and the parties were   Sri Lankan and the current owners today, what we have been discussion over the past 4 years about Seychelles and the region.

We trust some of the readers will point our article to the Police and Judiciary of Seychelles. If there is any serious media in Seychelles interested and their reporting benchmark.

Work has started for the construction of a R100 million medical centre that will employ at least 150 staff members.

DR RAMADOS IGNORES THE LAW AND GETS AWAY WITH IT