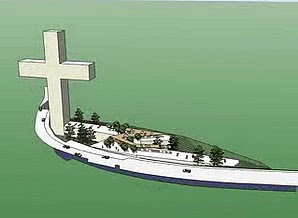 
A computer-generated image of the world's largest cross, set to be built in Nazareth pending municipal approval.

The proposal, which is still in its planning stages, is being floated by a group of affluent Christian businessmen from Israel and abroad.

The massive cross, dubbed "The Nazareth Cross," would tower 60 meters high, and would be decorated by some 7.2 million brilliant mosaic tiles made of Nazareth stone, according to project adviser Ibrahim Boulous.

The plans for the cross, which would be built next to the English Hospital in the ancient city, are still being worked on, and could be changed in the coming weeks, Boulous said.

A French architect is due to arrive in Israel this week to discuss the project, he added.

According to the original plan, a church will stand at the center of the monumental cross, while a state-of-the-art visitor center will be built in a five sq.-km. space around it, according to the project's Web site.

The privately-funded building proposal, which is being promoted by an NGO comprising various Christian denominations, is meant to increase tourism to the economically hard-hit city.

Nazareth deputy mayor Bashir Abdel-Razik said Sunday that the idea to build such a project has not been presented to the city, which must approve such a grandiose plan.

He said he was unsure if the plan would ever get off the ground.

The proposal for the huge cross is seen as likely to cause unrest among the city's Muslims, who make up two-thirds of the population of 74,000 people.

Religious tensions have boiled over in the past when the two sides had a heated six-year dispute over attempts by the Muslims to build a large mosque next to the Basilica, one of Christendom's holiest sites.

The Basilica is built on the site where Christians believe the angel Gabriel appeared before the Virgin Mary and foretold the birth of Jesus two millennia ago.

Israel eventually barred the construction of the mosque four years ago following severe pressure from the Vatican and a united Christian front against the building project.

Nazareth, which used to be heavily frequented by Israelis and tourists, has, like many other cities in Israel, been hard-hit by the Palestinian violence over the last seven years, with many shops in the historic Old City forced to close their doors as both Israelis and foreigners stayed away during this time.


With a respite in violence, locals and Tourism Ministry officials are hoping to see a resurgence in tourism to the Galilee town, which had been preparing for a surge of tourists for the millennium, just before the latest round of violence began.

A computer generated image of the cross planned to be built at Nazareth, different view.

We had wanted to add a picture of the tallest Chair, in the news recently via a German TV Technical program 26/09/07. The chair is red. The competition took place in Austria - Linz, the industrial heart of Austria, it is strange neither google or yahoo have the details in their search system. This is the problem of the world those who control the media they missinform the world too.

Below is a link to the recent record holder Italy: