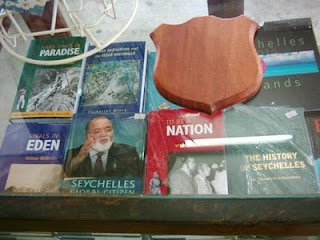 It has been over 30days since we last visited the Network - reason that we had to go to Seychelles - some of your contributions reactions without you realizing them. All advice was that we ought to wait - there was no time to wait.

Most of you dream of Sechelles - Seychelles as the ultimate destination to get away from the dreadful Europe work, work, work - money, money, money. The very many of you and others who slave away for 12 months to get/afford a holiday and find a place where there is peace, quiet, away for the rat race. Yet the populace do not appreciate their blessings or indeed myself because I did not or had not the time to go fishing, swimming proper or take a proper break, even after four years of hell in Britian.

Some of the very pressing reasons we had to go to Sechelles - Seychelles, the nasty situation in London over the nomination of the first EU President those who know our abilities, responsibilities and had at all cost wanted to manipulate us so that former Prime Minister Tony Blair got nominated, by going to Sechelles -Seychelles he and his entourage could not do this and they did not do it either, we were being closely watched by EU, UN, USA, AU officials, beside Seychelles government and the Catholic and other Christian groups.

Because the world is all about money, the second most important reason was to do with the mega world economic bust up which started last November, resulting in some 65 major Banks in the USA going bust and with it hundreds of $billions. The debacle of the Lehman Brothers/Heinz investment - going to Seychelles in the first place.

There is two side to any coin and what we have been saying for the past 20 years those experts, and officials who have been telling us and the public about only one side of the coin.

To all those who know that Seychelles National Assembly build by the Chinese is completed and what this will mean/spell for the future of Seychelles, the Indian Ocean and AU. I had packed a large suit case, the same one I had taken in 2004 - the ensuing earth quake and Tsunami of 2004/5 our explanation. Those in London who had given me a Polish Masonic book - the Masonic practice since changes in COMECON, a Russian bible gift of the Russian Church in London, a very large wok and a very large French pan - not pot. Beside other papers and documents and lots of poridge. I was not able to take that suitcase to Seychelles on Quatar.

In my anger decided to take only the present I had bought for my family complete prayer - Jewish regalia and the famous seven candles with olive oil for three individuals. My reason - those individuals, they say they are very devout Christians and know their Bible - my message here given they/their ancestors originated from France, they were Templars, the Hugenot bust up and very many other bust up to put it simply. The Christain, Muslim faith originate from not just Abraham, but from Jesus - the state of the world today.

I had brought Heinz to Seychelles, I had brought Lehman Brothers to Seychelles, (the Seychelles Stock Market Project - beside Mauritius, Palestine and others) beside very important multinational, economic issues involving the greater world Jewish interest in Britian, USA, the Middle East and Europe. The real reason they had gone bust. My experience in this field. I wanted to tell those in Seychelles even if I had to come home in pyjama - no food, no money - they are fradulent, they are dishonest along with the IMF, world bank and many other international institutions. Those in the world who are doing the dirty work and they and their media con, manipulate, lies - to the public as if they only can run the world alone. If they dare tell me I am a liar - put on those Jewish religious regalias and raise their hands to heaven in public or in front of me. Along with all the Seychelles Central Bank Officials and the IMF.

For sometime I have been monitoring and watching the situation in Dubai and his Royal Highness the Ruler know I have been watching developement - because he has been in indirect contact with us. I cannot and will not say everything here. I repeat I have the capicity and expertise to contribute very inportantly to positive management of world Markets, monetary systems and this applies to the Guf Region Nations.

Somebody who have worked close to Sir James Mancham came to Seychelles on Saturday - the next day I left Seychelles, the mega corporate debacle we have been involved the past 25 years and the CIA, the KGB, the British Services knowledge. That night Seychelles and world TV announcemment that the Dubai Holding Company would be defaulting on $3.5 billions payment - what this spelt. In private I had requested him to please try and negotiate with the people around the Dubai World corporation about the original fees, payment for my role and contribution in concepting of the so call Dubai world - the British construction company Beatty Balfour. They refused to pay me any money way back in 2001. The many terrible major debacle that have ensued some have made big healdines others not.

The importance of the world mega economic melt down - not the political crap we have been getting, those from the big multinational who have been using and abusing individuals like myself and taking their credits and intellect use and abuse them and then send the dogs or have then killed. The world melt down because of this infernal practice. They can pump as much as they want as long as this practice prevails - we will see the world coming to a stand still.

I have the capacity and expertise to re synergize the Dubai World mega mess and other USA, EU and Asia mess why should I do it can anybody tell me - you ladies and gentleman take the credit, make your $billions and then you send the dogs after me.

I have decide to address this thread on Friends of Europe, because I know that one or some of you may have contact to the Ruler - His Royal Highness the Ruler of the Emirates. Inspite of some fo the terrible issues we have remained friends in such term. Should Sir James Mancham messenger not able to come through make contact and address the issues we have discussed - I am open to discussion.

I have encountered shocking situation in Seychelles, those mega motor yatch almost as high as some of the Seychelles buildings, my meetings with the government officials, Mancham autobiography, the concern in Seychelles by the average people of the terrible direction Seychelles is heading with multinational and rich individuals buying everything. My own family property - that large India Construction company building his very private home almost a big as State House and I do not have even a toilet to my name- yet I worked, contributed importantly that Seychelles changed to a 3rd Republic, the current political and economic syste

m, beside the AU and Indian Ocean. In Seychelles we are supposed to have the capacity to negotiate and take such important contact directly with anybody in the Gulf Region State and the fact that we have to revert to Friend of Europe to address the issues to the global network - something is grossly very wrong. Yet the President J A Michel addressed the FAO and was awarded for his country inovative capability in Lebanon.
Among other important reasons - I had gone to Sechelles - Seychelles to get to meet, talk with President FA Rene. I had travelled with my uncle specially for this. I attempted 11 times to get a meeting and there was always a reason for not making it possible - yet.

I also ask those of you who have been monitoring my affairs and progress - since my return to Britain, the sudden change yet again in many UK greater Financial and economic issues. I had left that large suit case with the Polish Masonic book behind for 30days and the very bad omen when I went to collect it. The emphasis over the Tony Blair eventual trial suddenly the emphasis is on making the Taliban shed tears of blood.


Note: In the greater world of politic and finance - the issues of more troops for Afghanistan, how this reflect on the current developement for the Regional government of the Gulf State to put into place a different world currency. The older Ruler of the Gulf Region we have been privilaged to work with over the past 35 years, many dead. The Oil and US Dollar politic. Those younger generation, present ruler of the Gulf State who believe their wealth, money is everything in the world - they have yet to learn. ( in private we have been very politely asking those young Heads of State to be very careful, not their diplomatic power, wealth controls the world system - there exist other powers and mechanism, the sudden greater interest of the USA, Russia and China, even the AU in so called Seychelles, even the Gulf State Regions, they are talking with the worng party/person , former President FA Rene will/can confirm this) Our past important contributions in those issues and very much so in the future - those in the world who are aware and know - yet the media and politicians other views. Bringing Lehman Brothers to Seychelles - irrespective of Seychelles size in the world, Gulf region, AU, Asia and Mauritius. The emphasis, accent for those in the important financial world how in the past we have worked and contributed major world issues and the new developement in the Gulf State Region, African Union and Asia - proposed EU style system.

This morning 3 weeks before Christmast 2009, the announcement in most of the important British papers that it had cost the British Tax payers £850 billions to bail the Banks - what this amount will be by April 2010. What nobody is saying what this have cost Britain in Economic woes in £billions/trillions. Is anybody listening.

Seychelles History could have been written differeny, the Red Barons in Vienna - one of them the Pisec family.

We Have added Celine Dione Pour que tu m'aimes encore upon the Hist...
Posted by http://ioiss.blogspot.com/ at 03:06